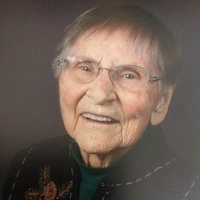 Wanda (Wynn) Hedlesky, 94, of Big Sandy, TN, passed away on April 5, 2019 at her home, surrounded by family and friends. Private memorial gatherings will be held at later dates (to be determined) in Tennessee and Hawaii.

Wanda was the daughter of Ruby William Wynn and Alice Marie (Allen) Wynn and was born in Portageville, Missouri. The family moved to Ann Arbor, MI, when she was still a small child.  After WWII began, she worked as a Rosie the Riveter in the converted Ford factory in Belleville, MI, riveting together B-24 bomber planes for the war effort.  In 1945, she joined the Women’s Army Corps (WACs) and served  as a medical technician, and later as a librarian.  After the war, she met her husband, Michael Hedlesky, while both were attending Eastern Michigan University in Ypsilanti, MI.  They had 6 children within 5 years of being married, including 2 sets of twins.  After living for a few years in Ann Arbor, MI, they moved to Ruby’s family home in Big Sandy, TN, and a few years later they eventually settled in Casanova, VA.

Upon retirement, Wanda and Mike returned to live in Big Sandy, TN and cared for her parents for many years. Wanda loved being with family and friends, reading good books, and traveling with her husband, which included trips to Australia, Ireland, France, Isle of Man, and many US destinations, especially national parks.  Michael passed away after 62 years of marriage on July 22, 2011. After his death, Wanda shared her time each year between her daughter, Katrina, in northern Nevada in the winter months, and her twin sons, Steve and Mike, along with her loving friend and caretaker, Marie DesJardins.  We have many fond memories of this time shared with her.

She is survived by five of her six children – Katrina Hedlesky (in Dayton, NV), twin sons – Dr. Steve Hedlesky and Michael Hedlesky (both in Big Sandy, TN), and twin daughters - Gina McCartney (in Vacaville, CA) and Anna Wynn (in Honolulu, HI).  Her youngest son, David Hedlesky, passed away on June 20, 2018 in Woodbine, MD.  She is also survived by 17 grandchildren and 8 great grandchildren.

In lieu of flowers, the family is requesting that donations be made, in memory of Wanda Hedlesky, to the Big Sandy Branch Library, 12 Front St., P.O. Box 115, Big Sandy, TN 38221 or the Henry County Medical Center Hospice at 301 Tyson Avenue, Paris, TN   38242.  The family wishes to express their appreciation for the staff of the Henry County Medical Center, who provided very professional and loving support to Wanda in her final weeks of life.

To order memorial trees or send flowers to the family in memory of Wanda Hedlesky, please visit our flower store.