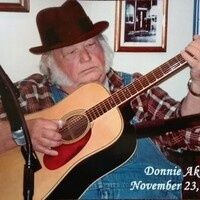 Mr. Thomas Donnie Akers, age 75, of Big Sandy, TN passed away November 23, 2020 at St. Thomas Hospital Midtown, in Nashville, TN.  He was born on May 8, 1945, in Memphis, TN, to the late Roy Thomas and Carolyn Christopher Akers.  He was also preceded in death by a brother, Dean Akers, of Big Sandy, TN.  Mr. Akers was a railroad engineer with L & N Railroad and then retired from CSX Railroad.

There will be a graveside service at 1 PM, on Sunday, November 29, 2020 at Crooked Creek Cemetery, in Big Sandy, TN, with Bro. Ken Zike officiating.

To order memorial trees or send flowers to the family in memory of Thomas Donnie Akers, please visit our flower store.