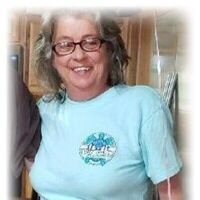 Ms. Rebecca "Becky" Pauline Medlin, age 60, of Big Sandy, TN, passed away on Tuesday, April 20, 2021, at Vanderbilt Medical Center in Nashville, TN.  She was born July 6, 1960, to the late Finis Melton and Hyacinth Lowery Melton who survives. She was also preceded in death by a grandson, Braden Sims.  She worked at Melton’s Fillin Station in Big Sandy, as a waitress.

Funeral services will be Thursday, April 22, 2021, 1PM, at Stockdale-Malin Funeral Home in Big Sandy, TN, with Bro. Kenny Louden officiating and burial to follow in Lowery Cemetery in Big Sandy.

To order memorial trees or send flowers to the family in memory of Rebecca Pauline Medlin, please visit our flower store.