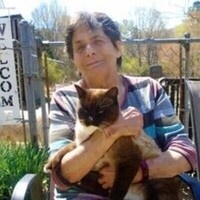 Nancy Elizabeth Lynch, 75, of Big Sandy, TN passed away on Sunday, February 6, 2022 at her residence. Mrs. Lynch was born on November 22, 1946 in Evergreen Park, IL to the late Frank Cavoto and Marion Gradle Cavoto. She was also preceded in death by her husband John Lynch; daughter Amy Lynch and sister Patricia Cavoto.  Mrs. Lynch was a retired deli worker with Sterks Grocery.

John Lynch of Merrillville, IN

Michael Lynch of Merrillville, IN

Patrick Lynch of Merrillville, IN

Therese (Patrick) Dipert of Griffith, IN

To order memorial trees or send flowers to the family in memory of Nancy Elizabeth Lynch, please visit our flower store.