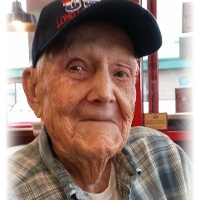 Mr. Marshall Halk Minton, age 96, of Big Sandy, TN. passed away on August 7, 2019 at Henry County Medical Center in Paris, TN. Mr. Minton was born on March 30, 1923 in Benham KY. to the late Leander “Nick”  Minton and Rebecca Morris Minton. He was preceded in death by his wife Verna Sandberg Minton, his son Marshall Howard Minton, his brothers and sisters Ivan, Connie, Robert “Fred”, Nora, Allie, Nellie, Luria, Anna. Mr. Minton was a World War II Army Veteran. Mr. and Mrs. Minton were married for over 66 years. He was a 75 year member of Brewer-Maddox Post 228 American legion in Big Sandy, TN. and a lifetime member of the VFW in Valparaiso, IN.  Mr. Minton was an avid outdoorsman and enjoyed a friendly game of poker.

Daughter: Marsha Minton of Kouts, IN.

Memorial visitation will be held on Saturday August 10, 2019 from 1:00-4:00pm at Stockdale-Malin Funeral Home in Big Sandy, TN.

In Lieu of flowers the family requests donations be made toward Mr. Minton’s final expenses in care of Stockdale-Malin Funeral Home.

To order memorial trees or send flowers to the family in memory of Marshall Halk Minton, please visit our flower store.