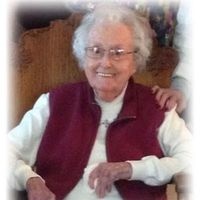 Mrs. Lillian D. Mattingly, age 97 of Big Sandy, TN passed away on Wednesday, October 30, 2019 at her residence. Mrs. Mattingly was born on July 28, 1922 in Harrisburg, IL to the late Herman Driskell and Hazel Cannon Driskell. She was also preceded in death by her husband Dan Mattingly and son Larry Mattingly. Mrs. Mattingly was retired from the family business of the Dan Mattingly Agency. She attended the First Church of God in Clarkston, MI and attended Big Sandy First Baptist Church. Mrs. Mattingly volunteered at Henry Co. Medical Center working in the Pink Petal Gift Shop.

Funeral Services will be held on Saturday, November 2, 2019 at 1 pm at the Stockdale-Malin Chapel in Big Sandy, TN with Bro. Gerald Scott and Bro. Robert Burnett  officiating. Burial will follow in the Ramble Creek Cemetery.

To order memorial trees or send flowers to the family in memory of Lillian D. Mattingly, please visit our flower store.