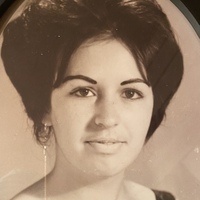 Mrs. Bonnie Fay Townsend, age 74, of Camden, TN., passed away on June 13, 2020 at Life Care Center of Bruceton, TN. in Bruceton, TN. Mrs. Townsend was born on October 8, 1945 in Big Sandy, TN.  to the late Frank Berry and Ila Mae Rhodes Berry.  She was preceded in death by her husband David Leon Townsend and brother Donald Berry. She was a retired seamstress with H.I.S. She was also a member of Chalk Level Baptist Church and Holladay Chapter of the Eastern Star.

Funeral services will be held on Wednesday, June 17, 2020, at 2:00 pm at Stockdale-Malin Funeral Home in Camden, TN. with Bro. Al Ward officiating, with burial following at Eastview Cemetery

Eastern Star service will be held on Tuesday, June 16, 2020 at 6:30 pm at Stockdale-Malin Funeral Home in Camden, TN.

To order memorial trees or send flowers to the family in memory of Bonnie Fay Townsend, please visit our flower store.