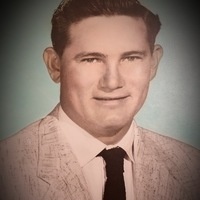 Mr. Billy Lewis Jordan, age 84 of Camden, TN., passed away on October 20, 2019 at his residence. Mr. Jordan was born on January 31, 1935 in Benton County, TN. to the late Lynch Jordan and Nelle Oxford Jordan, he was also preceded in death by his sister Dianne Muller and brothers Bobby Jordan and Jimmy Jordan. Mr. Jordan was an Army Veteran, a retired crane operator with TVA, a member of the Crossroads Missionary Baptist Church in Camden, TN. and a 50 year mason in The Camden Lodge # 179.

Funeral service will be held on Wednesday, October 23, 2019 at Crossroads Missionary Baptist Church in Camden, TN. at 11:00 am with Bro. Randy Thompson and Bro. Arzell Douglas officiating. Burial will follow at Crossroads Cemetery.

To order memorial trees or send flowers to the family in memory of Billy Lewis Jordan, please visit our flower store.